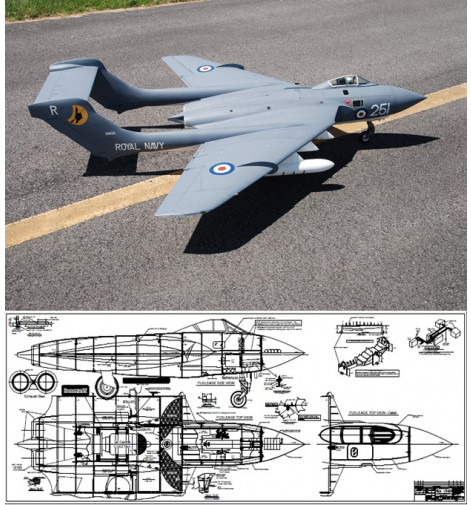 The Sea Vixen is an all wood construction scale jet. This  is a follow on to Kerry Sterner's very popular Vampire and the same building techniques and materials are used in the construction of the Sea Vixen . The entire Airframe can be built for a fraction of the cost of a composite ARF with the added benefit thet the builder has full control of the "quality and structural integrity" of the finished airframe. This presents favorable and desired alternitive concept in the realm of today's mega dollar ARF airframes. The scale accessories and details provided in the six large sheets of drawings can transform the Sea Vixen into a full competition ready model if desired. The giant scale Sea Vixen plan set clearly illustrate all structure as well as showing installation of flaps and retracts. The Sea Vixen plan shows the installation of  Sierra Giant Scale retracts, servos and b Jet Central CHEETAH turbine engine and features removable wing panels.  The basic structures use conventional “modeling” tools and materials such as balsa and plywood, and the techniques are straightforward; easily accomplished by anyone with previous model building experience. There are many online building threads at www.rcuniverse.com forums and www.rcscalebuilder.com  forums for Kerry Sterner's plans. Tech support is also available via email at www.ziroliplans.com or by phone 9:00 to 5:00 Mon - Fri EST 631-467-4765. The plan includes full-size templates for all the required parts allowing you to cut a complete “kit” before you start construction. If you would like to purchase a wood kit see KIT CUTTER'S on selection bar at the top of each page.The plans have a separate instruction guide and building notes on the plans. If you choose gear or an engine not shown on the plans you should have them on hand when you start construction to make any changes needed for mounting. Nick Ziroli Plans recommends covering the airframe with 1 oz fiberglass cloth and ZAP Z-poxy finishing resin. Nick Ziroli Plans has building and scale accessories available for the Sea Vixen.