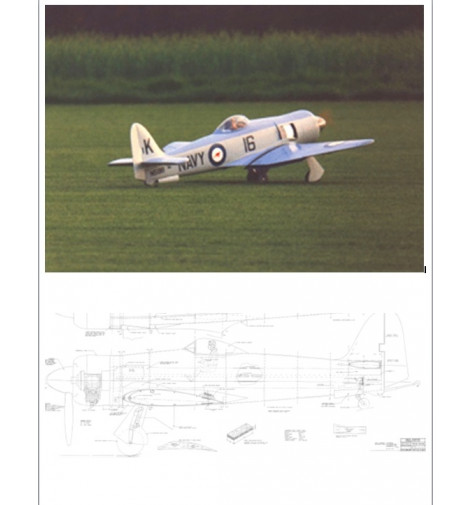 HAWKER SEA FURY
This plane is scaled at 2.35 inches to the foot. The plans show all structures drawn full size including the installation of flaps and Hank Likes retracts and our Giant Scale Retracts. Full size templates are also shown for all ribs and formers. If you would like to purchase a wood kit see KIT CUTTER'S on selection bar at the top of each page.The parts available are: fiberglass cowl and a clear plastic canopy. Sorry, our aluminum spinner and backplate is no longer available. Primary construction is light plywood, balsa and spruce or pine using conventional building techniques. All structures are built-up and sheeted with 1/8 or 3/32 inch balsa. The 90” Seafury uses 5.50 diameter wheels and a 1/5 scale WW II pilot figure.